In this article, I will introduce how an abstract form of mass, called complexity, generates Time Dilation between symbols. Conventionally, mass is a property of particles and atoms, however I propose there exists a different form of mass that is a property of symbols, and it's made of the intelligent relationships joining arrangements of matter (eg. logos, designs, etc.). The abstract mass will then be compared to regular mass with respect to the flow of time and space.

In physical space, motion takes place when an arrangement of matter changes positions over a period of time (d/t). There are lots of things to be said about motion, and Einstein’s Theory of Special Relativity specifically explains how motion (and acceleration) through space produces a universal phenomenon called time dilation.

It states that any massive object which accelerates to very high velocities, near the speed of light, will slow its time dramatically. From an outside perspective, the object will undergo a bizarre form of time travel, because:

1) the object will continue to exist alongside the observer (unlike jumping into a new future)
2) the object’s existence will age at a slower rate.

For example, if a spaceship travelled near the speed of light it could reach the next star system in 2.1 years. However, the crew would have only experienced a 6-month journey.

This can really happen in our universe! And this equation, based on the pythagorean theorem, explains it: 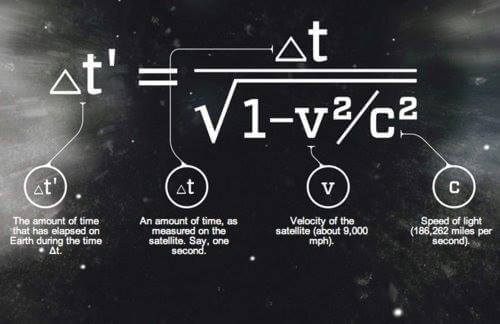 Unfortunately, this physical form of time dilation plays a minuscule role in our daily lives, because as human beings, our bodies of mass move too slowly across space to generate enough time dilation; so scientists don’t bother measuring the difference in elapsed time between earthbound citizens.

However, can its principles be translated into a philosophy of mind?

Do people somehow harness time dilation? Is education a method for cultivating an abstract form of it? Consider that the impulses of light in our brains travel near the speed of light, can these light speed interactions be somehow bound to symbolic masses that travel between positions in the mind?

What if time dilation does in fact pervade human society — however in some abstract form that is caused by an entirely different type of mass? What if we actively manipulated time as we assemble structures in our minds?

Perhaps within an abstract space are abstract masses (ie. symbols) that travel along abstract pathways (ie. relationship patterns), which span across all minds.

Consider two people sitting still motionless, but speaking and coordinating information between themselves. In a physical sense, there is not much motion being generated (other than the motion of particles between their mouths and ears, and the waving of their hands). However, if visualized in an abstract sense, a motion (ie. transfer) of information might be seen, and if information can be thought of as a structure in some abstract space, it might be considered a type of moving object (symbol). These structures of information might move across mindspace according to some abstract laws of motion.

So in essence, there are two forms of time dilation — one is physical and one is abstract, however both are explained using the same basic pattern:

So what are the basic consequences of physical and abstract forms of time dilation?

I am hypothesizing that the most important artifacts, books, documents, concepts, etc. are all structures of information that have harnessed time-dilation in order to outlive their contemporaries. All ancient things that have survived this far into the future, are extensive networks of abstract relationships with a greater lifespan vis-a-vis everything else of symbolic value.

Highly networked organizations travel further across space within a single period of time because they move more information across their networks within the same amount of time as those of less networked observers. This leads to a greater possible change in environment for networked masses, and enables them to out-compete outsiders.

Consider that education, support groups, and funding might provide us ways to manipulate abstract time dilation by finding, creating, and growing networks in mindspace.

By measuring the abstract time dilation produced within a network, we might unmask the forces that cause evolution, competition, survival of the fittest, and ultimately, decision-making.

And given the rise of the Internet, time dilation could be having a dramatic impact on our world, while we're completely blind to it.